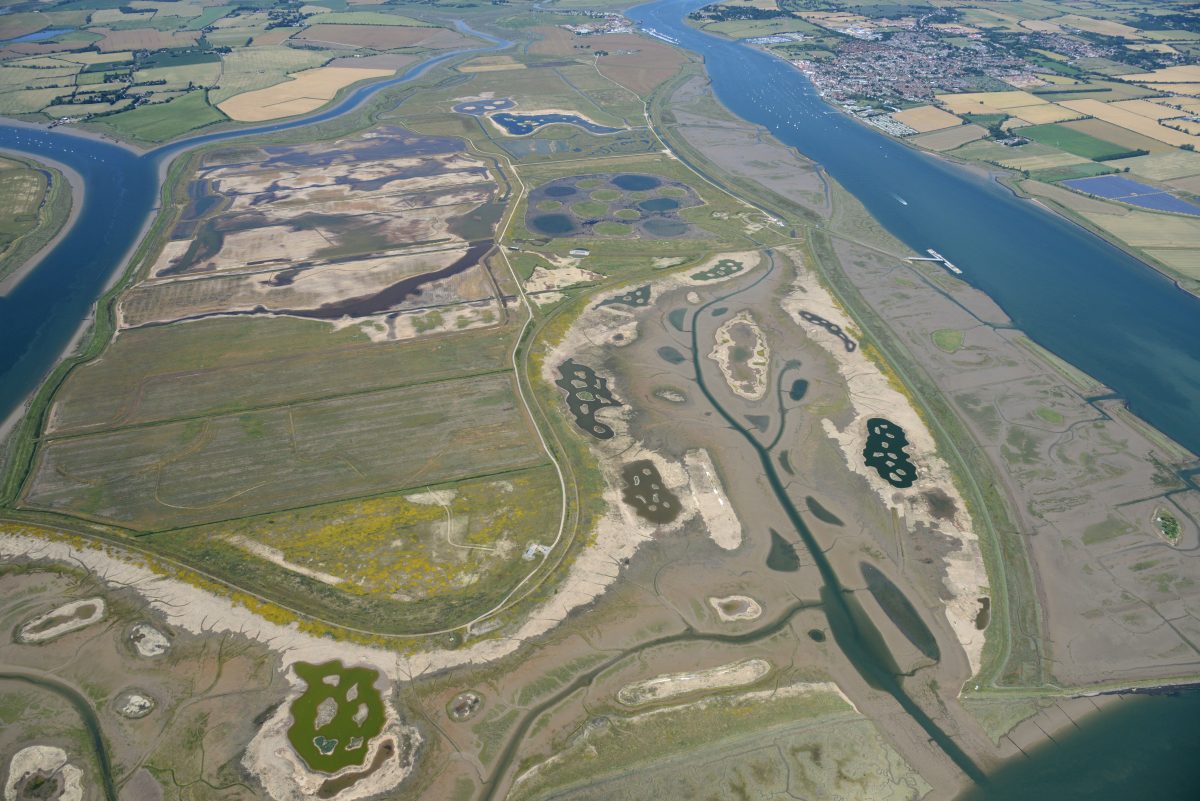 What is the Wallasea Island Wild Coast Project?

What is the Wallasea Island Wild Coast Project?
The Wallasea Island Wild Coast Project is a landmark conservation and engineering project, the largest of its type in Europe. This exciting project is working to transform 670 hectares (ha) of arable farmland into the coastal marshland it once was. This area is more than double the size of the City of London!

The project builds on the success of the 115ha of new saltmarsh and intertidal mud created on the north of the island by Defra in 2006. This area, known as Allfleet’s Marsh, is now jointly managed by the RSPB and Natural England.

What will it involve?

The first phase of the project was completed by Crossrail. They constructed a temporary jetty in the River Crouch and used this facility to deliver excavated material from its tunnelling operations deep under London. The first material arrived by ship in August 2012.

Crossrail imported just over 3 million tonnes of clean, recovered, soils by ship to shape the new 165ha landform of Jubilee Marsh in the east of the island. Raising the land reduces the volume of seawater entering on each tide. In turn, this also reduces the adverse effects on navigation and shell fisheries that would result from an unmanaged seawall breach.

The Wallasea Island Wild Coast Project is the largest of its kind in Europe and has attracted lots of interest worldwide. The scheme provides an example of how industry and conservation can work together to create something amazing that will not only benefit wildlife, but future generations for years to come.

Why is the Wallasea Island Wild Coast Project needed?
Four hundred years ago there were 30,000ha of wildlife-rich saltmarsh around the Essex coast. Now, saltmarsh is rare, with just 2,500ha left. That’s a loss equivalent to 39,000 football pitches!

In England, saltmarshes and mudflats are being lost at the alarming rate of 100ha each year. Sadly, this rate of saltmarsh loss will only increase with climate change. Rising sea levels steadily erode the precious mudflats between land and sea and the food-rich environment will be lost to our wildlife forever.

The Wallasea Island Wild Coast Project aims to re-create some of this lost landscape and save it, both for the incredible wildlife that relies on it and for the people that relish it for its restorative benefits and for the pleasure of seeing such places exist.

What will it look like?
Once all the work at Wallasea Island is complete it will be a rich mosaic of habitats. From mudflats to saltmarsh to grassy sea walls and lagoons, wildlife including shelduck, avocet, redshank and the rare oil beetle will find food aplenty.

As sea levels rise the inter-tidal portions of the island will act to future proof the landscape for species that are moving in line with climate change and the whole of the project area will provide a home for nature as their natural homes start to diminish.

Wallasea Island will become an amazing space for people too, with wildlife spectacles galore and a chance to relax in the wilds of Essex.

Project Update
As stated above, material from the Crossrail project was used to complete Jubilee Marsh (Cell 1). Crossrail completed the delivery of material to site in March 2015, with a total of 3.02 million tonnes of clean earth coming from the construction of tunnels and station below London. A maximum of five ships were used, delivering a peak of 45,000 tonnes per week.

It was recognised early in the consultation process that the management of shipping to avoid potential conflicts with the sailing community was essential. A monthly liaison meeting was held throughout the shipping period. These meetings included Crouch Harbour Authority, the Joint Sailing Clubs Committee, Crossrail, RSPB and Crossrail’s Wallasea Contractors (BAM Nuttall / Van Oord). This frequent liaison helped to manage shipping movements during the most important sailing times, through to a successful conclusion. These arrangements worked well and we are grateful for the help received from those involved.

The material delivered to Wallasea by Crossrail was not sufficient to complete the ground forming required in Jubilee Marsh. The balance was gained on site through the creation of new wildlife habitat elsewhere on the island. These diggings provided close to a further million tonnes of material, through the creation of Pool Marsh (the Cell 3 lagoon- 40ha), Grass Farm Lagoon (Cell 5 lagoon – 25ha), a ditch/lagoon network named Acres Fleet (18ha), an anti-predator ditch (3.2km) around Marsh Flats (Cell 5 grazing marsh) and the phase two water vole mitigation habitat (3.5ha).

The ground forming of Jubilee Marsh was completed in May 2015. Following extensive pre-breach groundworks to seaward, starting in April, the seawalls were finally breached at three locations on 11 July 2015. This was a huge milestone for the RSPB Wallasea Island Wild Coast Project, with the wall beaches allowing water to enter the east/south of the island (in a managed way) for the first time in 450+ years.

Jubilee Marsh is developing really well and as predicted. During its second first winter the area had a peak usage of just over 7,000 birds, increasing to an impressive 12,000 plus in winter three. These birds were made up of a mixture of wildfowl and waders, with key wildfowl species being:  brent goose, shelduck, teal, wigeon and pintail; and waders:  grey plover, ringed plover, dunlin, curlew and redshank.

In autumn 2015 we allowed saline water into the 40ha Cell 3 lagoon, to the south and west of the material handling system. Also, with the installation of a further 12 water control structures in summer 2016, we gained full control of the water levels throughout the Cell 5 habitats, as detailed above.  Two new circular footpaths were opened in 2016, allowing the exploration of these new and rapidly developing habitats. By the end of 2016 we had transformed 65% of the island, in terms of land forming.

To complete the project to the originally consented design would have require a further eight million tonnes of clean soils. We worked very hard to secure extra material but it proved impossible to find significant volumes of material to a realistic timescale. With these issues in mind, we started working on a ‘Plan B’ in February 2016. This alternative plan involves using an existing seawall sluice in the south of the island to allow saline water into a series of shallow lagoons, using low bunds and the existing topography. The water will flow off via Cell 3 and out through the northern outlet sluice into Jubilee Marsh.

We consulted on these revised plans and then submitted the required planning application to Essex County Council (ECC) in January 2017. At the same time, we submitted related plans for visitor facilities, including the provision of a reception hide (visitor centre) capable of handling 50,000 visitors per annum and a 360-degree viewing hide. Both the habitat creation and visitor facility submissions were successful, with permissions received on 6 October 2017.

When our quotes came back for the consented groundworks/structures we needed to value engineer the project to ensure it was affordable. The revised scheme involves a smaller area of saline lagoons, with the remaining area managed as brackish grazing marsh rather than saline lagoon habitat. These revised plans received planning permission from ECC on 4 July 2018, whist the original element of the works were being worked on. Our contractors Bam Nuttall Ltd completed the required groundworks and structures at the end September. Saline water was added to these lagoons for the first time on 9 November 2018. It will take time for the habitats to develop to their full potential, but we are very pleased with the progress to-date.

The progression of the habitat development is reflected in the 2019 breeding bird numbers, these included pochard (8 pairs), black-headed gull (1,928), Mediterranean gull (4), common tern (56), avocet (146), oystercatcher (27), little ringed plover (5), lapwing (27), redshank (18), skylark (231), yellow wagtail (67) common whitethroat (20), corn bunting (124) and reed bunting (79). The majority of these figures represent a significant increase on 2018 levels, with the total for avocet making Wallasea Island the best breeding site for this species in the UK! The total for corn bunting is particularly pleasing. Wallasea has always been a good site for breeding corn buntings and, along with The Dengie, probably the best in Essex in terms of breeding density. The 2019 figure of 124 singing males is 17 higher than the peak number recorded when the site was intensively managed arable land. And, with no disruption from harvesting, productivity should have been significantly higher.

The completion of the lagoon groundworks in autumn 2018 marked the completion of the habitat creation element of the Wallasea Island Wild Coast Project. Further funding will be needed to complete the required improvements to visitor facilities, we are working hard to secure these funds but it is going to take some time, possible as much as three years. The move away from importing fill material means that the Material Handling System is surplus to requirements. The works to remove these structures began on 3 July 2019 and the work is scheduled to be completed by mid-September 2019.

A key plank of our visitor strategy has always been to use Burnham as a gateway to the project. For this to work effectively a jetty close to our visitor facilities on the Wallasea side is fundamental. To this end, we made a planning submission to Rochford District Council (in July 2017) for a floating pontoon style jetty at Grassland Point. At the time of writing we are still awaiting a decision on this jetty planning submission, though we are not aware of any issues that would prevent us receiving this vital permission.

We would like to thank the Crouch Harbour Authority for their continued support and positive engagement with the Wallasea Island Wild Coast Project.